As we go into what may well be another very long day of elections for the Presidency of the United States, I wanted to reprise two images from 2004: 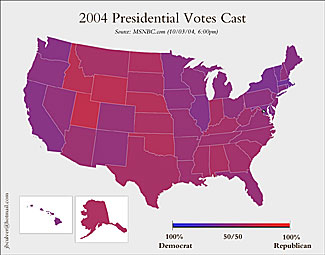 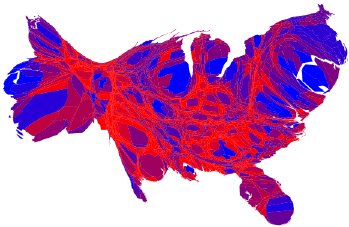 Click on either for more details and the context four years ago.

Despite the electoral college, America isn’t a red country or a blue country, and few states are red or blue. Most of the country is a gloriously chaotic mix, where the elections are usually reasonably close.

Both of the candidates want what they believe is best for the country, and both of the candidates have millions of supporters. Let’s hope for a clear decision on election night, in an election which is sufficiently free of chicanery that we all accept the winner, and move on to addressing the very real and serious problems which confront the world.