Chaos in the Airports! Baa! Baa! 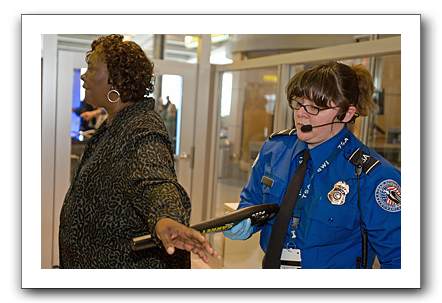 Some days the snark just writes itself:

The group that created Smokey Bear and McGruff the Crime Dog has a new potential icon: Stephanie the airport screener.

A $1.3 million ad campaign launched this month teams the Ad Council and the Transportation Security Administration trying to change behavior of passengers who no longer automatically accept post-Sept. 11 airport security procedures. The public relations push explains the terrorist threat and the reasons behind annoyances at checkpoints.

A passenger focus group conducted for TSA by New York City business consulting firm Blue Lime found that “unquestioning compliance has diminished.” Passengers say they are more afraid of missing their flight than they are of an airplane being attacked, the 73-page Blue Lime report found. (“TSA ads aim to get fliers on board with security measures,” USA Today)

Stephanie Naar has been in the news before, as part of the TSA’s wasting our money on jackboots badges. Not sure (yet) if the image is her. I’ll snap a pic if I see the ad.

PS to TSA: there’s a good reason McGruff and Smokey were animated.

2 comments on "Chaos in the Airports! Baa! Baa!"