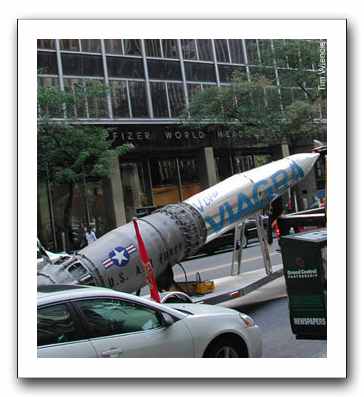 “It’s been in the back of my mind since you first came in: How do you get the missile on the trailer into Manhattan?” federal Judge William Pauley III asked.

Sachs, from West Babylon, said cops just laughed as he passed through the Queens Midtown Tunnel on his way into the city Sept. 8.

Sachs also claimed he drove his “missile” through the Lincoln Tunnel five times, and was only stopped twice.

“They checked license and registration, but not the missile,” he said.

“You’re telling me that when you drove up to the Lincoln Tunnel -” Pauley said.

“They saluted,” said Sachs, who is representing himself in court.

I was going to comment, but I think I’ll just salute.