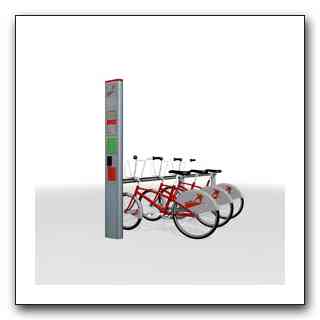 There’s a story in the New York Times about a bike rental program in Washington DC. It’s targeted at residents, not tourists, and has a subscription-based model.

Improved technology allows programs to better protect bicycles. In Washington, SmartBike subscribers who keep bicycles longer than the three-hour maximum will receive demerits and could eventually lose renting privileges. Bicycles gone for more than 48 hours will be deemed lost, with the last user charged a $200 replacement fee.

That technology comes with a price, which is one reason cities and advertisers started joining forces to offer bike-sharing. The European programs would cost cities about $4,500 per bike if sponsors did not step in, Mr. DeMaio said. “Bicycle-Sharing Program to Be First of Kind in U.S.”

$4,500 is 22.5 bikes. Put another way, they could buy 2,500 bikes, rather than the 120 they’re buying. That would require a lot more space if you bought them all at once, but you might just buy them as bikes are stolen. Looking at it another way, if you took the $500,000 being spent on technology, and invested it at 5%, you would make $25,000 per year, enough to completely replace the fleet annually.

This is (obviously) an incomplete analysis. But the cost of protection jumped out at me. Maybe it’s typical for how people in Washington think about asset protection.

Originally published by adam on 4 May 2008
Last modified on 9 Jul 2017
Categories:   economics

3 comments on "Spending to Protect Assets"