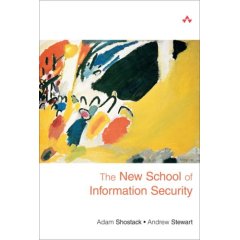 Our editor says that the Safari e-book edition of The New School is now available. Hardcopies should be out in a week or so.

Nick Owen thinks he won’t be invited to the prom in the New School, but he’s wrong. He turned me on to Bennett Stewart’s work, which influenced how we talk about ROI.

KJW/Code likes the first chapter. Decius on Memstreams says that our editorial blurb “makes a lot of bold claims without explaining how those claims are met. I eagerly await further reviews and shorter articles written by the authors to promote their book…”

Also, a couple of people emailed me asking for a table of contents and more sample content. Here’s the table of contents, and yes, Decius, there will be more that we’ll release over the next little while. We have a first couple of interviews lined up, and are eager to get the ideas out there in forms which are easy to digest.

1. OBSERVING THE WORLD AND ASKING WHY

Spam, and Other Problems with Email 4
Hostile Code 7
Security Breaches 9
Identity and the Theft of Identity 11
Should We Just Start Over? 14
The Need for a New School 15

4. THE RISE OF THE SECURITY BREACH

How Do Companies Lose Data? 64
Disclose Breaches 68
Possible Criticisms of Breach Data 70
Moving from Art to Science 74
Get Involved 76

7. LIFE IN THE NEW SCHOOL

People Are People 132
Breach Data Is Not Actuarial Data 136
Powerful Externalities 137
The Human Computer Interface and
Risk Compensation 139
The Use and Abuse of Language 142
Skills Shortages, Organizational
Structure, and Collaboration 144