Are We Measuring the Right Things? 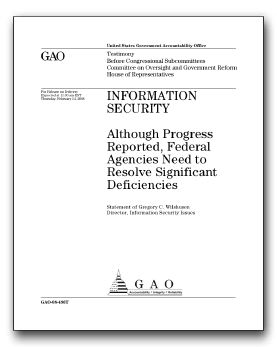 One of the reasons that airline passengers sit on the tarmac for hours before takeoff is how the FAA Department of Transportation measures “on time departures.” The on time departure is measured by push-back from the gate, not wheels leaving the tarmac. (Airlines argue that the former is in their control.) If you measure the wrong things, you create incentives for bizarre behavior.

Which is why I was fascinated to read the new GAO report, “Information Security: Although Progress Reported, Federal Agencies Need to Resolve Significant Deficiencies.”

While progress may be reported, PogoWasRight calls out:

If that’s progress, maybe we need some regression?

More seriously, I think it’s great progress that we are talking about the failure rates. Now we need to start to question the things being measured that allow the GAO to summarize that state of affairs as progress.

I wonder, where else are we measuring the wrong things?

[Update: I was measuring the wrong agency.]

One comment on "Are We Measuring the Right Things?"