"There’s supposed to be a Mars-shattering Ka-boom!" 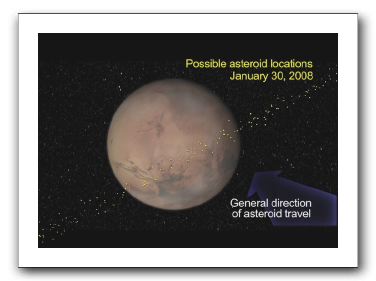 Here at Emergent Chaos, we’re big fans of large objects hitting other large objects at high speed. Which is why it’s important to tell you that 2007-WD5 is a 50 meter asteroid that’s set to pass within 48,000 kilometers of Mars next month.

“We estimate such impacts occur on Mars every thousand years or so,” said Steve Chesley, a scientist at JPL. “If 2007 WD5 were to thump Mars on Jan. 30, we calculate it would hit at about 30,000 miles per hour and might create a crater more than half-a-mile wide.” The Mars Rover Opportunity is exploring a crater approximately this size right now. (JPL press release.)

More details about the orbit at the JPL small-body datatbase. Story via VOA news.