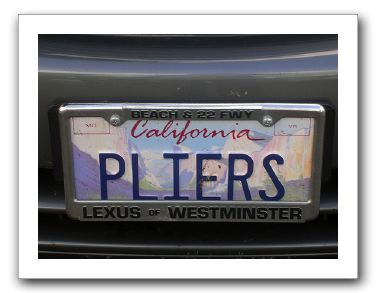 This city’s congestion pricing for drivers is heralded around the world for reducing traffic and pollution. It’s also causing an unintended effect: a sharp jump in thieves stealing or counterfeiting license plates.

Thieves are pinching plates by the dozens every day to fool the city’s traffic cameras, which enforce the £8 ($16) daily charge to drive in central London as well as other traffic infractions … With someone else’s license plate on their car, scofflaws can drive around free, and any fines are billed to the plate’s rightful owners.

Before the congestion charge took effect in February 2003, police didn’t bother to track stolen number plates…because so few incidents were reported … Reports of stolen plates in the city spiked to 9,777 last year.

This is precisely the opposite of how we’d want such a system to work: it should catch criminals and ignore the rest of us. [Updated this for clarity.]

Unfortunately, most tracking systems are perverse, and do exactly what we don’t want: criminals learn to get around them, and the general public loses their privacy.

When looking at a system, ask yourself, “is this good enough to stop people motivated to get around it? If it’s not, then look at the costs.

We can do this with the new American approach to tourism:

Terrorists are going to enter the country illegally, using paths worn smooth by millions of illegal immigrants. Meanwhile, millions of people are deciding to take their business and leisure elsewhere, because of the harsh face we show the world at our borders.

8 comments on "Security is never static"