1.5 billion, and whaddaya get? 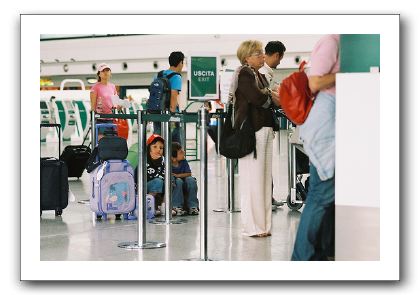 I wrote this post sitting on a plane to Montreal. There were all sorts of announcements about how you had to be on international flights thirty minutes before takeoff, to make Congress happy:

Congress mandated that DHS’ Customs and Border Protection (CBP) establish a requirement to receive advance information on international passengers traveling by air prior to their departure, as part of the 2004 Intelligence Reform and Terrorism Prevention Act (IRTPA)… The final APIS predeparture regulation will require air carriers to transmit manifests 30 minutes prior to departure of the aircraft or provide manifest information on passengers as each passenger checks in for the flight, up to the time when aircraft doors are secured. (“DHS Announces Predeparture Screening of International Passengers and First Step Toward Secure Flight“)

I couldn’t help but ask what this costs. It’s 30 minutes per person flying to or from the US. According to the US Department of Transportation “US International Air Passenger and Freight Statistics,” there were 154 million international air passengers in 2006. That’s 154 million people with at least half an hour wasted. That’s 77 million hours. 3.2 million days. That’s 570 years. At minimum wage ($5.85) that’s 450 million bucks in wasted time. I don’t think minimum wage is really the right number to use. Most international flyers are probably at least of average income. Wikipedia claims (“Personal income in the United States“) that’s just under $40,000 per person who’s employed full time. That’s $20 an hour, and at that rate, this policy costs the public $1.5 billion a year.

For that kind of money, maybe TSA could buy faster computers?

With all that time wasted, no wonder Congress is worried about how people behave in airport bathrooms.

Second aside: all of this ignores that the US is a wealthy country, and some fraction of travelers come from poorer places, where some people live on as little as a dollar or two per day. I think it’s reasonable to assume that the average person traveling by air internationally has enough money to do so.