Buy Gas, Get Busted for Pedophilia? 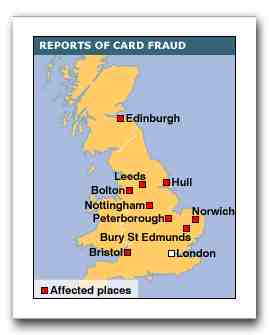 Thousands of motorists who use a bank card to buy petrol are thought to have lost millions of pounds in an international criminal operation. It is believed cards are being skimmed at petrol stations, where the card details and pin numbers are retrieved and money withdrawn from the account.

That’s impressive if the thieves have gone to the stations one by one, less so if they cracked a central billing computer. Hard to tell, because the U.K. doesn’t (yet) require breach notification.

As to the effects of credit card theft, which I said were low, Ross Anderson has an article at Light Blue Touchpaper, “Extreme Online Risks:”

An article in the Guardian, and a more detailed story in PC Pro, give the background to Operation Ore. In this operation, hundreds (and possibly thousands) of innocent men were raided by the police on suspicion of downloading child pornography, when in fact they had simply been victims of credit card fraud. The police appear to have completely misunderstood the forensic evidence; once the light began to dawn, it seems that they closed ranks and covered up.

What I’d like to know is, are all those cameras helping reduce crime over in the UK?

2 comments on "Buy Gas, Get Busted for Pedophilia?"