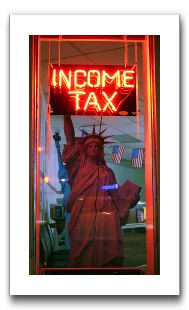 Techdirt carries marvelous coverage of the increasing devolution of our intellectual property system. However there is some bad advice in “Be Careful Not To Use Any Patented Tax Shelters This Tax Season.”

The bad advice is in the last sentence:

So as we get to tax day, besides going over all your tax forms and deductions carefully, you may need to spend an extra day pouring over patents to make sure you’re not infringing.

This is bad advice because of of the way that intellectual property, especially patents work. It is the responsibility of the intellectual property holder to police their property. In other words, it’s not up to me to see what patents I might be infringing, it’s the patent holder’s job.

There are lots of good reasons for this, including that it’s hard to know exactly what infringes and what doesn’t, especially as patents get more complex and ubiquitous. Many patent holders aren’t vigorous in their enforcement. I recommend that in most cases, it’s best to use patents defensively, rather than offensively. If I am using a patent defensively, that means I don’t really care if you’re infringing, as long as you’re not trying to get me to pay you for your patents. (And in such a case, the more infringers, the better.) So if you patent breathing oxygen, I pull out my patent on picking one’s nose and say, “Let’s cross-license!”

That’s just the start however. Patent law has a provision in it that there are triple damages for knowing infringement. Consequently, if you are in a situation where you might stumble over some stupid patent or other, don’t check to see if you might be infringing. If you don’t know you’re infringing, you might be surprised and have to pay some royalties. If you know you’re infringing, you’ll have to pay triple damages. We technologists have been lectured by our attorneys about this issue. You may think it stupid, but ignorance is a defense in intellectual property.

As a practical matter here, if you have taken some deduction that might be patented, it’s up to the patent holder to find you and shake you down. Given that tax records are considered private, that puts them at a disadvantage. If you know you’re infringing, you could get triple damages. The patent holder will probably be shaking down accountants, makers of tax preparation software, and others. They aren’t going to be shaking you down, and even if they do, a reasonable royalty on a license would be about 1%. That’s another reason they will go after the other folks.

So as stupid as tax deduction patents are, and as much as I agree with Techdirt on the rest of the article, trust me, it’s better for you to never read a patent than to read lots of them.