Chaos and Piracy on the High Seas 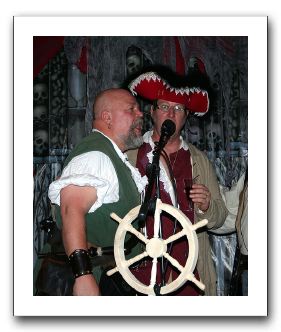 “This repo man drives off with ocean freighters”

“I’m sure there are those who would like to add me to a list of modern pirates of the Caribbean, but I do whatever I can to protect the legal rights of my clients,” said Hardberger, whose company, Vessel Extractions in New Orleans, has negotiated the releases of another dozen cargo ships and prevented the seizures of many others

and “Activist a ‘pirate,’ not eco-terrorist:”

A Japanese whaling ship caught fire after being chased and harassed by Watson’s fleet, the ships and volunteers of the Sea Shepherd Conservation Society, which not only rammed the whaling boats but fired smoke canisters and ropes to entangle the propellers.

Japan announced Wednesday that it was ending its whaling season early because of the fire, which killed a crewman. Although the blaze came a day after Watson’s group pulled back for lack of fuel, and there’s no alleged connection, Japan calls Watson a terrorist.

While I don’t think what Watson is doing is right, I think it’s wrong to call him a terrorist. He’s not attacking random uninvolved bystanders, which is a requirement for terrorism. He is engaging in something approaching privateering, which, alas, went out of style over 150 years ago.

It doesn’t seem that the US has actually signed onto the Declaration of Paris, which might mean that Congress could issue this fellow a letter of marque, allowing him to legally attack Japanese whalers. (I do seem to recall some UN treaty banning the practice, but can’t find it.)

The United States used privateers in the war of 1812, and there’s interesting information about how that worked in a book review post at Mountainrunnner, “Book Review: The Abolition of Privateering and the Declaration of Paris.”

Photo: The Finale, by cynroux.

One comment on "Chaos and Piracy on the High Seas"