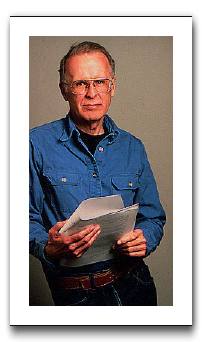 John Backus, leader of the Fortran team has died at the age of 82, according to The New York Times. Fortran itself celebrates its fiftieth birthday this year, and you can still write it in any other language, even Haskell. Even Lisp.

Back in the days when I would rather have died than work for IBM, in part because of their dress code, but also in part because of their dress code, but also because of the influence that Ted Nelson had on me, I remember being impressed with Backus’s way of flouting form. IBM employees were required to wear suits; Backus always wore a denim suit. I remember the picture of him in the newspaper. It’s a little thing, but it meant a lot to me. I’m glad that the photo I found of him on IBM’s site has him in denim, and glad that I can explain why dressing in denim was at one time radical.

I also think it important that even the NYT today wrote “Fortran” and not “FORTRAN.” Writing it as a proper noun and not an acronym was an annoying eccentricity of mine in those days as well.