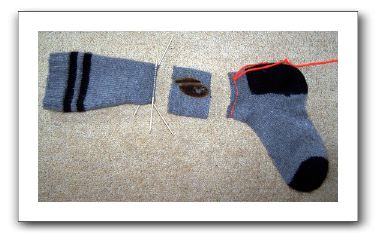 Over the last week, I’ve read several things involving poor Lind Weaver. In case you missed it, she’s a 57-year-old owner of a horse farm. She got a bill for the amputation of her right foot. As you should expect if you’re a regular reader here, it wasn’t her. Comic hijinks ensue which conclude with

After weeks of wrangling with the hospital’s billing reps, Weaver finally stormed into the facility and kicked her heels up on the desk of the chief administrator. “Obviously, I have both of my feet,” she told him.

She’s either the victim of an incredible records screw-up, or (cue dramatic organ chords) Healthcare Identity Theft. The articles I’ve read state that it’s the latter, and in fact while it may be comic, it’s no laughing matter. This sort of thing is going to get someone killed.

Many years ago, Stan Kelly-Bootle told us that GIGO means Garbage In, Gospel Out. This is the tendency that data, having passed through a computer, is sanitized and made holy and incorruptible. The Pope is only infallible when he’s speaking ex cathedra, but the an Excel spreadsheet — there’s no arguing with that.

I just have to blink several times that in this day and age when a middle-aged woman calls a hospital up and says, “excuse me, there must be a mistake in this bill for an amputation” that no one thought there might be something wrong. This is the power of the GIGO principle. The old saw that the computer doesn’t make mistakes is still there, people just bite their tongues when they think it.

We also have a Digital Confidence Survey from the Cyber Security Industry Alliance (CSIA) that has lots of pretty graphs and things that I have trouble making sense of.

The Digital Confidence Index is 57. Um, okay. I’m not sure what that means. The CSIA thinks that that means people want more laws about this. I’m not disagreeing, I have my own ideas on what those ought to be.

There’s a nice chart there that tells us that 50% of Internet users “avoid making purchases because I’m afraid my information could get stolen.” There isn’t enough context here. There are plenty of times I have avoided buying something on line for more or less that reason. But if you dig deeper, it was because they wanted me to register and create an account, not because of my personal information itself. I don’t want to have a relationship with them, I want to buy something. Maybe if I buy a number of things, I’ll want to proceed with a relationship, but not on the first date.

Nonetheless, I don’t think this is exactly what is behind that datum. People are still being afraid of the wrong things. Network security could be a lot better, but the best thing you can do to avoid identity theft is to buy a shredder. I don’t have the reference at hand, but last year, 90% of identity theft was from dumpster-diving and so on, not computer problems.

As bad as network security is, the real danger is elsewhere. It’s the same problem as worrying about airline safety as you drive without a seat belt.

But really, isn’t it better that people lose confidence in computers and networks? The way I see it, we have a surfeit of belief that whatever that screen says is right. Identity theft problems can be helped more by realizing that every business process in the world is screwed up and the ones that are computerized are going to be screwed up in zanier ways because there is no human oversight.

Discoveries don’t from from flashes of insight, but from a mutter that starts with, “that’s funny….” We need fewer people in charge of these systems saying not, “our records show you had an amputation on April 31st” and more people saying, “that’s funny….”