The Pat-Downs at Public Stadiums 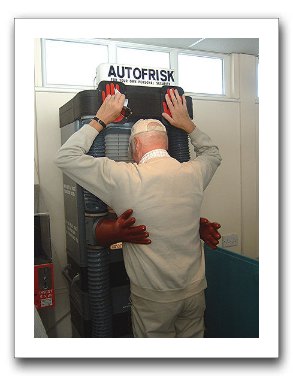 “There’s no specific reason, or identifiable credible threat to Seahawks fans and because the stadium is a public stadium, it is unconstitutional to require these pat-downs,” said Chris Wion, one of the Seattle lawyers representing the plaintiffs. “I think this is the same type of erosion of civil rights that you’ll find taking place in the national arena over the past few years.

The article also notes that the Free Americans beat the Jackboots in Tampa, but the Jackboots have demanded a re-match. I covered the start of the game in “Gordon Johnston vs The NFL Who Cried Wolf.”

The cause for action is that the stadium was built with public money. It almost makes me sad that “Citizens for More Important Things” crushed the idea of wasting more of our money on a stadium for the Sonics. Almost. I’m glad Seattle voted 3:1 to spend our money on more important things. And I just love saying “Citizens for more important things.” I get a little frisson of delight every time I say it. It makes me think that de Tocqueville didn’t travel in vain.

So kudos to Fred and Kathleen Stark for bringing the suit.