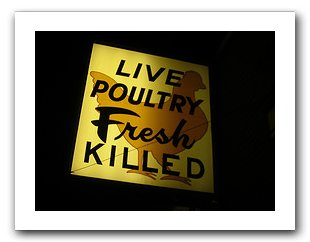 If you’ve ever lived in Cambridge, Mass, you’ve probably seen the sign. I recognized it instantly, seven years after I left Boston. It’s on Cambridge St, in East Cambridge. Boston’s Weekly Dig dug in:

It’s one of the more puzzling quirks of the local cultural consciousness that Gould’s shop is almost universally known, yet few know what actually happens inside or what “Live Poultry Fresh Killed” even means.

What it means is this: Mayflower Poultry kills chickens on-site. They kill lots of them. They do this because fresh poultry—meat that, a few hours before, was live poultry—tastes a whole lot better than the shrink-wrapped garbage you buy at the grocery store.

But Mayflower Poultry’s famous sign doesn’t just alert pedestrians to the fact that several hundred animals a week are getting slaughtered in the middle of a dense residential neighborhood—a modern zoning curiosity if there ever was one. In many ways, Mayflower is a throwback to a commercial model that’s 30, 40 or 50 years in the past—when modestly appointed specialty stores formed the backbone of the consumer economy.

Now I’m sad I never went in. Back then, the idea of fresh killed made me slightly queasy. Now? It makes me hungry. The article is a very interesting look at a practical way in which markets have re-shaped the way we eat.