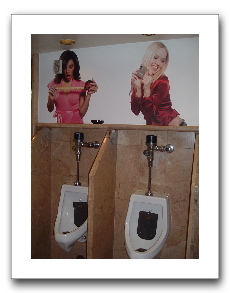 In March of 2005, Alec Muffett predicted “National loyalty cards,” and I mocked him for it. Since then, I’ve decided that all non-trivial privacy fears come true. And since then, Alec’s plan has taken another step.

The BBC reports about a new “Blair plan for ‘people’s panels’.” No, I didn’t make that up, Comrade. He really called them people’s panels, and the BBC tells us:

They will look at how retailers, such as supermarket giant Tesco, use loyalty cards to create databases of their clients and tailor-make services for them based on the information gathered.

Photo of urinals at the Las Vegas Hilton from Ann-Rocco.com.