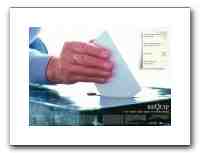 One of the motivators often discussed for voter ID card requirements is voter registration fraud. I believe that ID card requirements are like poll taxes, and are not justified. I believe that they’re not justified even if they’re free, because of personal privacy concerns, regarding addresses. You know, like Gretchen Ferderbar had before her 911 operator ex-boyfriend killed her. Or like Amy Boyer had before she was tracked down and murdered. Or like Salman Rushdie, who can’t vote because he’s very aware that people want to murder him. Government claims that the data will be secured are laughable when you face threats like that. (If you don’t believe me, read the breaches category archive.)

Until last week, I didn’t have data to back that. In “Reed: 55,000 illegal entries scrubbed from database,” we get numbers (it’s a good article, and worth reading in full):

The purge of illegal registrations is the result of months of work by county and state elections officials, who began combing the new statewide voter database after its launch in January.

But probes of the records found very few cases of potential voter fraud. About 30 cases of possible double voting were forwarded to county officials for investigation, Reed said. (Emphasis added.)