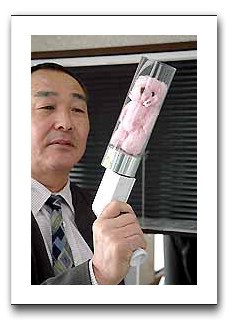 IMABARI, Ehime [Japan] — A paint firm here is hoping to add color to wedding receptions in Japan with a new device it has jointly developed — a gun-shaped party [favor] that shoots out a teddy bear.

Sunamiya, a paint firm based in Imabari, Ehime Prefecture, announced the development of the device, which blasts a teddy bear equipped with a parachute into the air. The teddy bear parachutes down afterwards.

Developers hit on the idea after noticing that it had become a trend for people to throw teddy bears into the air instead of bouquets at wedding receptions.

From Gun-shaped teddy bear crackers ready to liven up wedding receptions, via BoingBoing.