What Does Rumsfeld Need to Do To Be Fired? 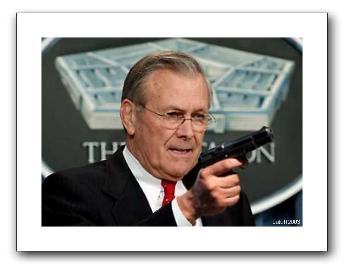 On November 27, 2002, Pentagon General Counsel William Haynes, following discussions with Deputy Secretary Wolfowitz, General Myers, and Doug Feith, informed the Secretary of Defense that forced nudity and the use of the fear of dogs to induce stress were lawful techniques, and he recommended that they be approved for use at Guantanamo. (The lists of techniques to which Haynes was referring can be found in this memorandum.) On December 2, 2002, Secretary Rumsfeld approved those techniques for use at Guantanamo — and subsequently those techniques were used on detainee Mohammed al-Qahtani.

In other words, the Secretary of Defense authorized criminal conduct.

Loyalty to your subordinates should stop when they break the law. Its time for Rumsfeld to face charges for his actions.

4 comments on "What Does Rumsfeld Need to Do To Be Fired?"