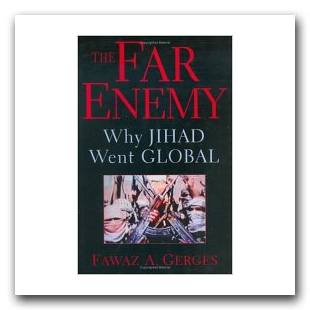 I’ve been meaning to blog about “The Far Enemy: Why Jihad Went Global ” by Fawaz Georges for quite some time.

The book is a fascinating look at the internal debates of the various Jihadist sub-groups, and takes its title from an argument over targeting the “near enemy,” or local government, or the “far enemy,” the United States. Georges is clearly deeply immersed in Jihadist debate, and traces much of the history and character of those debates.

It was a deeply challenging read, on several levels. First, Georges orientation is so close to the Jihadists that he offers up distinctions which seem like the splitting of the thinnest hairs. He also seems to express sympathies for the jihadist movement in sentences like “At this stage, it is difficult to see how and if jihadis will ever be able to rescue their movement from terminal decline and decay.” In other places, he refers to the murder of civilians as “military operations.” Yet others, he made important assertions that I would have liked to see explored, and simply followed them with “suffice it to say.”

Before digging into of of those arguments, I’ll be clear that I’m not an expert on this, and am restating Georges’ argument. There is assertion, put forth by a set of Jihadists in the 50s and 60s that jihad is not only a collective responsibility, but an individual one. There is also the assertion that anyone witnessing great injustice may call for Jihad, without the full support of the clergy. This is (apparently) at odds with more traditional jurisprudence, which requires the clergy to call for jihad.

Thus when reading Jonathan Rauch’s article “A War on Jihadism,” I was surprised to see this:

“I think defining who the enemy is is a real problem in this war,” says Mary Habeck, a military historian at the Johns Hopkins University School of Advanced International Studies. “If you can’t define who’s a real threat and who’s just exercising free speech, it’s a problem.” As it happens, Habeck is the author of one of three new books that, taken together, suggest the time is right to name the battle. It is a war on jihadism.

If it is actually the case that an individual, such as Osama bin Ladin, or Zawaqari, can not declare jihad on his own, then that seems part of a reasonable basis on which to decide who is a threat, and who is exercising free speech.

This test is not so bright-line as I would like. What to do with those who claim that jihad is a personal responsibility, that an individual may call for it, and that whatever provocations exist are not enough to justify such a call?

One of the basic precepts of the nation state system, which distinguishes it from predecessor systems, is that the state has a monopoly on violence, and uses that violence in furtherance of policy, not personal, aims.

Such a distinction also fails to address (say) the Iranian death sentence on Salman Rushdie, or their President’s call to wipe Israel off the map. But it seems essential, as part of preserving the nation-state system, to assert that individuals may not invoke armed struggle, and this is an enemy which nation states can rally to fight.

Of course, actually bothering to fight an individual lowers the state to a smaller, less grandiose level, but that seems unavoidable.