"Now war is declared — and battle come down" 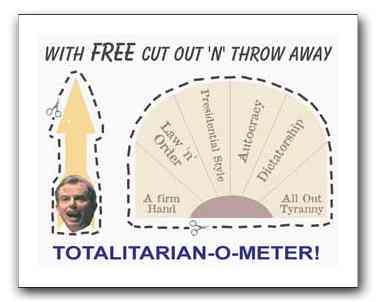 The UK, having already abolished liberty, is now hard at work on abolishing any relevance Parliament might have. See SaveParliament.org.uk. In “Who wants the Abolition of Parliament Bill,” David Howarth writes:

The boring title of the Legislative and Regulatory Reform Bill hides an astonishing proposal. It gives ministers power to alter any law passed by Parliament. The only limitations are that new crimes cannot be created if the penalty is greater than two years in prison and that it cannot increase taxation. But any other law can be changed, no matter how important. All ministers will have to do is propose an order, wait a few weeks and, voilà, the law is changed.

(Totalitarian-o-meter from SchNEWS, YOU’RE HAVING A L.A.R.R-F, Last rites for Parliament under new Bill?)

You can get a sense of how the government views laws from the Independent, “Helen and Sylvia, the new face of terrorism” via Alec Muffett:

WHAT HAPPENED: Mr Haw has become a permanent fixture in Parliament Square since June 2001, when he erected a series of placards berating Tony Blair and President George Bush. The Serious Organised Crime and Police Act 2005, was designed mainly with his vigil in mind. But the High Court ruled that the legislation did not cover his protest as it could not be applied retrospectively. The Government is appealing against that decision. [Emphasis added.]

Finally, Harraj Mann was removed from a flight after he sang along (“Now war is declared — and battle come down”) with the Clash’s London Calling. Good thing he wasn’t singing along to Guns of Brixton. See “Man held as terrorism suspect over punk song.”

One comment on ""Now war is declared — and battle come down""