Big Brother Has Your Best Interests At Heart 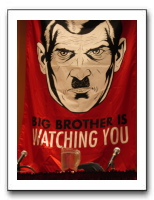 So pay no attention to the thoughtcriminals who are not bored, and their ridiculous propaganda documenting “Abuses of surveillance cameras.” We all know that cameras never lie, film can’t be edited or mis-interpreted, the police would never use cameras to look in your bedroom window, and that the videos taken will be strictly controlled. Those who try to convince you that the camera adds ten pounds are also those who think that there are abuses of surveillance cameras. Really, though, what is meant by abuse? It is the wrongful use of something. As we all know, the President has inherent Constitutional authority as Commander-in-Chief to take those actions he deems needed to protect all Americans and the freedoms we enjoy. As President he has inherent authority to watch your every move, and we are all thankful that he chooses to exercise these rights. Further, by creating the best-documented generation in history, he is providing countless current and future historians with an unparalleled look into how each of us goes about our day, keeping American Values in our hearts at all times.

Why anyone would think it an abuse of surveillance cameras to capture evidence of so-called “peaceful protesters” taking to the streets and supporting terrorists? Even if some of the evidence isn’t provided to defense counsel, the President deserves credit for allowing defense counsel at trials. Claims that these “edited” videos don’t present a “full picture” are clearly wrong. Each and every frame of a video is a full picture. Those full pictures, each and every one of them, is far more evidence than before Big Brother deployed cameras like this.

Won’t someone think of the children? Dedicated government employees like Brian J. Doyle spent hours reviewing videotape of children. In the future, cameras will prevent traitors like Doyle from approaching children, because they will fear the cameras. Of course, people like Doyle will know where the public cameras are, so there will be a second, secret set of cameras, so as to protect the children from abuse of surveillance cameras.

All this because Big Brother wants to spend your money to keep you safe. Don’t you feel safer already?

4 comments on "Big Brother Has Your Best Interests At Heart"