The Emergent Field of War and Economics? 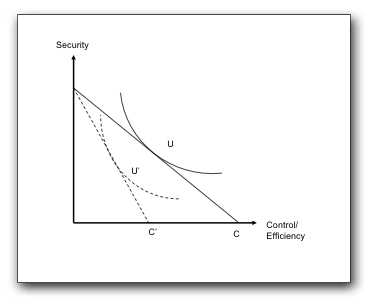 There’s a fascinating new paper available from West Point’s Combatting Terrorism Center, on “Harmony and Disharmony: Exploiting al-Qa’ida’s Organizational Vulnerabilities.” What I found most fascinating about the paper was not the (apparently) new approach of reading what the terrorists are saying to gain insight into their weaknesses, but its adoption of the language of economics in the war on terror.

I’m using the phrase ‘war and economics’ much like people use the phrase law and economics or security and economics; while many wars have been about resources, the use of the tools of the economist sheds light on a subject.

All organizations including terrorist ones, suffer from problems of friction, changing and conflicting goals, organizational tendencies towards self-preservation. (Allan Friedman pointed this out in a comment on “Emergent Intelligence.” While Emergent Chaos doesn’t have the most comments per post, we’ve managed to attract a high quality audience, and the great comments are available in an RSS feed.)

The need to communicate, not only for tactical purposes, but also for strategic ones, is crucial to any organization. Unlike nation states, which can convene their leaders in a single place where highly effective face to face discussions can take place, terrorist groups such as al Qaeda must work online. They are, perhaps, no less subject to mis-interpreted emails than the rest of us. I suspect, with their low-volume communication, high rates of job stress, hard to use encryption software, etc, that their communications are far more challenging than those that the rest of us face. This means that a great deal of their strategic thinking is made public in its early and formative stages. The ability to read the other side’s doctrinal communication, and to perhaps participate in such debates is exceptionally powerful.

Insofar as openness as a weakness, both sides suffer from it. We can read the thoughts of Al Qaeda leadership, and they can read the works of the US Military Academy’s Counter Terrorist Center. That Center gets the benefit of having its work widely distributed, and I hope they find value in comments such as these.

Anyway, back to the paper, the title, and the nominal point of this essay is the use of agency problems in analyzing al Qaeda’s operational issues:

The problems outlined above fall into the larger category of “agency problems.” Such problems arise when three conditions exist: (1) a principal needs to delegate certain actions or decisions to an agent; (2) the principal can neither perfectly monitor the agent’s actions, nor punish with certainty when a transgression is identified; and (3) the agent’s preferences are not aligned with those of the principal … Understanding why groups face preference divergence, and when preference divergence creates operational challenges, facilitates government actions intended to exacerbate internal organizational problems of the terrorists.

I look forward to the announcement that al Qaeda will be undergoing lay-offs as they re-organize to address new conditions. It is, after all, a strikingly effective way to paralyze most organizations. And who’s to know if its for real or not?

3 comments on "The Emergent Field of War and Economics?"