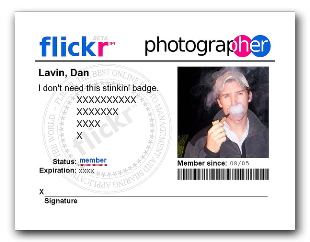 During 2005, the Vail Police Department alphabetized hundreds of drivers licenses, passports and other shoddy identification that will be incinerated at year’s end. Once the IDs come through the department’s doors, they’re gone for good, Mulson said. A liquor license allows bars to confiscate any ID that is fake or appears to be fake.

Glendining offers his doormen $20 gift certificates for each fake ID pulled. In recent years, the fake IDs have gotten better.
“You really gotta make the best effort you can,” Glendining said.

The bar keeps a sample of real and fake IDs around for doormen to learn from. Telltale signs of a fake include IDs that crack when bent, eye color or height that doesn’t match or a nervous person shuffling. But oftentimes, it comes down to the feel of the ID.

“Some doormen have a real knack for it,” Glendining said.

Dan Lavin posted his ID to Flickr. I liked the subtitle. There’s a whole series of these IDs mixed in under fdsflickrtoys.

Story from Summit News, via Davi Ottenheimer’s Flying Penguin, ‘the poetry of information security,’ in a post titled “Rewards for Fake ID.” (He even has poetry. When I get competitive, you may get some jazz here.)